TOYOTA tried to confuse us by renaming Corolla as Auris and then going back to Corolla.

But one thing that’s never been in doubt is that the world’s best-selling car has always been a sensible buy, ultra-reliable and practical.

The new version adds a touch of style and attitude, especially the Touring Trek version we are testing here.

It follows the usual outdoor lifestyle recipe: Skid plates, black plastic cladding and the ride height is raised by 20mm.

But the reality is there is no 4x4 system so you can’t go anywhere off-road beyond a dirt track.

What you do get, however, is Toyota’s excellent petrol/electric hybrid engine that delivers diesel-matching economy of around 50mpg from the 2-litre engine.

Everyone’s gone hybrid crazy now but Toyota is the real expert, having started the ball rolling more than 20 years ago with the pioneering Prius.

Which is why Toyota has the smoothest hybrids on the road, eerily silent with a smooth auto box, that is only occasionally interrupted if you accelerate hard when the petrol engine note becomes slightly strained.

The Corolla ride is comfortable on motorways and its handling is much improved for a 4.6 metre-long estate.

There’s also good head and leg room for driver and four passengers. You get a cabin that is well laid out, with smart cloth seats. It is well equipped and well connected with all the tech you’d expect.

But the infotainment screen is only average and slow to react.

Practicality is good, with 581 litres of boot space that increases to 1,600 with the rear seats folded flat, plus you get extra space under the boot floor that’s handy for any wet clothes or walking boots.

And as I found out, the boot will take a full-sized bike if you remove the front wheel – that is a bit of a pain though, so I’d get a cycle rack.

The bike that came with the car is also a Trek electric hybrid and can be bought as a very healthy but expensive £2,900 option.

I have to say, I loved it because I went up hills like Chris Froome.

STRIFE IN THE FAST LANE

How much are speeding fines in the UK?
Road Test

The craftmanship in Bentley's Bentayga cabin is next-level

Is it illegal for someone to park on your driveway or in front of your home?

In fact, after a week with the hybrid Corolla and the bike, I have to say I’m more convinced that hybrid power is the immediate future than I’ve ever been before. And that the Corolla name was well worth bringing back.

Toyota has just started a scrappage scheme with £2,000 off a British-built Corolla. Another reason to go and check one out. 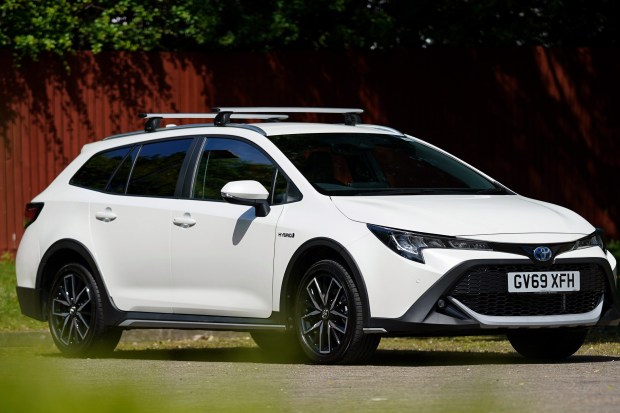 I'm a lazy mum, my kids game for hours & stay up til 2am - kids don't need rules